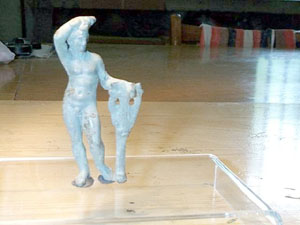 The statuette is 9.5 cm high. It was found and donated by a person who claimed anonymity. But there's no doubt that the figurine was found at the Tatul sanctuary.
It is thought that the temple has been used around the 5th century B.C.
Orpheus is looked upon as one of the chief poets and musicians of antiquity, whose lyre mastery could charm the wild beasts and even draw trees and rocks from their places and stop rivers from flowing.

He has also become a key figure of Greek legend, although various sources mention that Orpheus was borrowed by the Greeks from their Thracian neighbors.
The ancient Thracians' tomb mausoleum and sanctuary near the village of Tatul were made before Romans came to the Balkans. The tomb was completely hollowed out into a rock with a ritual stairway leading to it. Niches, solar circles and buildings are hollowed out. There is a wonderful view to the green hills of the Rhodopes from here. The tomb is near to the most western houses of the village of Tatul. It is a monolithic rock, processed byÿhuman hand into a big pretty roughly made pyramid. It is about 4.5 m high and 6 m wideÿat its base. At the top the pyramid ends up with a ground slightly elevated in the middle. An irregularÿ1.87 m long grave is hollowed outÿhere in such a way that its sides do not form angles or edges. There was a lid to cover the grave, but it is now missing.